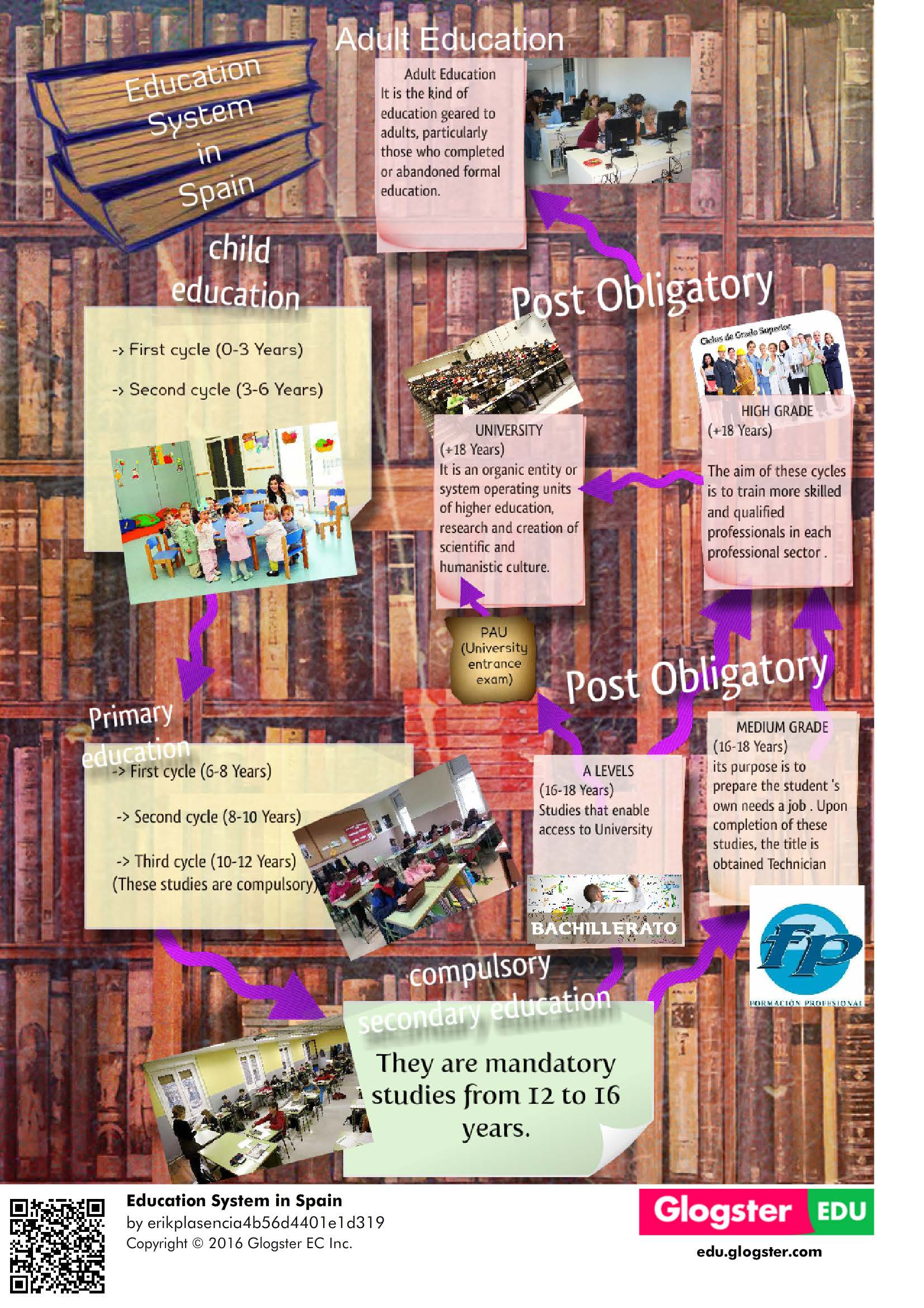 In France the compulsory ages to school is from 6 to 16 years old.

The two types of school are the State schools which are free and the Private schools where you must pay admission fees and you generally have RE religious education.

Children go to nursery school from 2 and a half to six years old, then to primary schools from six to eleven years old.

They go to secondary school from eleven to sixteen and they have a common curriculum everywhere.

After secondary schools, students have a course choice between three pathways general, technical and vocational learning. All of them have a three-year course.

In Italy a state school system or Education System has existed since 1859, when the Legge Casati (Casati Act) mandated educational responsibilities for the forthcoming Italian state (Italian unification took place in 1861). The Casati Act made primary education compulsory, and had the goal of increasing literacy. This law gave control of primary education to the single towns, of secondary education to the provinces, and the universities were managed by the State. Even with the Casati Act and compulsory education, in rural (and southern) areas children often were not sent to school (the rate of children enrolled in primary education would reach 90% only after 70 years) and the illiteracy rate (which was nearly 80% in 1861) took more than 50 years to halve.

The next important law concerning the Italian education system was the Legge Gentile. This act was issued in 1923, thus whenBenito Mussolini and his National Fascist Party were in power. In fact, Giovanni Gentile was appointed the task of creating an education system deemed fit for the fascist system. The compulsory age of education was raised to 14 years, and was somewhat based on a ladder system: after the first five years of primary education, one could choose the ‘Scuola media’, which would give further access to the «liceo» and other secondary education, or the ‘avviamento al lavoro’ (work training), which was intended to give a quick entry into the low strates of the workforce. The reform enhanced the role of the Liceo Classico, created by the Casati Act in 1859 (and intended during the Fascist era as the peak of secondary education, with the goal of forming the future upper classes), and created the Technical, Commercial and Industrial institutes and the Liceo Scientifico. TheLiceo Classico was the only secondary school that gave access to all types of higher education until 1968. The influence of Gentile’s Idealism was great,[4] and he considered the Catholic religion to be the «fundament and crowning» of education. In 1962 the ‘avviamento al lavoro’ was abolished, and all children until 14 years had to follow a single program, encompassing primary education (scuola elementare) and middle school (scuola media).

From 1962 to the present day, the main structure of Italian primary (and secondary) education remained largely unchanged, even if some modifications were made: a narrowing of the gap between males and females (through the merging of the two distinct programmes for technical education, and the optional introduction of mixed-gender gym classes), a change in the structure of secondary school (legge Berlinguer) and the creation of new licei, ‘istituti tecnici’ and ‘istituti professionali’, giving the student more choices in their paths.

In 1999, in accordance with the guidelines laid down by the Bologna Process, the Italian university system switched from the old system (vecchio ordinamento, which led to the traditional 5-year Laurea degree), to the new system (nuovo ordinamento). The nuovo ordinamento split the former Laurea into two tracks: the Laurea triennale (a three-year degree akin to the Bachelor’s Degree), followed by the 2-year Laurea specialistica (Master’s Degree), the latter renamed Laurea Magistrale in 2007. A credit system was established to quantify the amount of work needed by each course and exam (25 work hours = 1 credit), as well as enhance the possibility to change course of studies and facilitate the transfer of credits for further studies or go on exchange (e.g. Erasmus Programme) in another country. However, it is now established that there is just a five-year degree «Laurea Magistrale a Ciclo Unico» for programmes such as Law and a six-year degree for Medicine.
Primary education
Scuola primaria (primary school), also known as scuola elementare, is commonly preceded by three years of non-compulsory nursery school (or kindergarten, «asilo»). Scuola elementare lasts five years. Until middle school, the educational curriculum is the same for all pupils: although one can attend a private or state-funded school, the subjects studied are the same (with the exception of special schools for the blind or the hearing-impaired). The students are given a basic education in Italian, English, mathematics, natural sciences, history, geography, social studies, physical education and visual and musical arts.

The Scuola secondaria di secondo grado lasts five years (roughly from age 14 to 19). Every tier involves an exam at the end of the final year, called esame di stato, required to gain a degree and have access to further university education.

For historical reasons, there are three types of Scuola secondaria di secondo grado, subsequently divided into further specialization. Currently all of the secondary schools in Italy have most of the structure and subjects in common (such as Italian grammar, history and mathematics),[6] while some subjects are peculiar to a particular type of course (i.e. ancient Greek in the Liceo Classico, business economics in the Istituto tecnico economico or scenography in the Liceo Artistico):

Liceo (lyceum), education received in a Liceo is mostly theoretical, with a specialization in a specific field of studies (humanities, science, or art); less attention is devoted to the technical-practical education.[7]
Istituto tecnico (technical institute), education given in an Istituto tecnico offers both a wide theoretical education and a specialization in a specific field of studies (e.g.: economy, humanities, administration, law, technology, tourism), often integrated with a three/six months internship in a company, association or university, during the fifth and last year of study.
Istituto professionale (professional-vocational- institute), this type of school offers a form of secondary education oriented towards practical subjects (engineering, agriculture, gastronomy, technical assistance, handicrafts), and enables the students to start searching for a job as soon as they have completed their studies, sometimes sooner, as some schools offer a diploma after 3 years instead of 5.
Any type of secondary school that lasts 5 years grants access to the final exam, called esame di maturità or esame di stato; this exam takes place every year between June and July and grants access to university.

In 2013, The Programme for International Student Assessment, coordinated by the OECD, ranks the Italian secondary education as the 21st in the world, above the United States and in the OECD average, and observes a wide gap between results in Northern Italian schools, which performed significantly better than the national average (among the best in the world in some subjects), and Southern Italian schools, that had much poorer results. Moreover, students in state-owned schools perform better than students in private schools. An Italian student is 19 when they enter university, while in other countries 18 is the more common age.
Higher education
Italy has a large and international network of public and state affiliated universities and schools offering degrees in higher education. State-run universities of Italy constitute the main percentage of tertiary education in Italy, and are managed under the supervision of Italian’s Ministry of Education.
Italian universities are among the oldest universities in the world. In particular the University of Bologna (founded in 1088), University of Padua, founded in 1222, and the University of Naples Federico II, the oldest public and laic university in the world, are the oldest state universities in Europe. Most universities in Italy are state-supported.

There are also a number of Superior Graduate Schools (Grandes écoles) or Scuola Superiore Universitaria, offer officially recognized titles, including the Diploma di Perfezionamento equivalent to a Doctorate, Dottorato di Ricerca i.e. Research Doctorate or Doctor Philosophiae i.e. Ph.D. Some of them also organize courses Master’s degree. There are three Superior Graduate Schools with «university status», three institutes with the status of Doctoral Colleges, which function at graduate and post-graduate level. Nine further schools are direct offshoots of the universities (i.e. do not have their own ‘university status’). The first one is the Scuola Normale Superiore di Pisa (founded in 1810 by Napoleon as a branch of École Normale Supérieure), taking the model of organization from the famous École Normale Supérieure. These institutions are commonly referred to as «Schools of Excellence» (i.e. «Scuole di Eccellenza»).

Italy hosts a broad variety of universities, colleges and academies. Founded in 1088, the University of Bologna is likely the oldest in the world. In 2009, the University of Bologna is, according to The Times, the only Italian college in the top 200 World Universities. Milan’s Bocconi University has been ranked among the top 20 best business schools in the world by The Wall Street Journal international rankings, especially thanks to its M.B.A.program, which in 2007 placed it no. 17 in the world in terms of graduate recruitment preference by major multinational companies. Bocconi was also ranked by Forbes as the best worldwide in the specific category Value for Money. In May 2008, Bocconi overtook several traditionally top global business schools in the Financial Times Executive education ranking, reaching no. 5 in Europe and no. 15 in the world.[20]

According to National Science Indicators (1981–2002), a database produced by Research Services Group containing listings of output and citation statistics for more than 90 countries, Italy has an above-average output of scientific papers (in terms of number of papers written with at least one author being from Italy) in space science (9.75% of papers in the world being from Italy), mathematics (5.51% of papers in the world), computer science, neurosciences, and physics; the lowest, but still slightly above world-average, output in terms of number of papers produced is recorded in the social sciences, psychology and psychiatry, and economics and business.

Children aged three to six, may attend kindergarten. After that, school is compulsory for nine or ten years. From grades 1 through 4 children attend elementary school (Grundschule), where the subjects taught are the same for all. Then, after the 4th grade, they are separated according to their academic ability and the wishes of their families, and attend one of three different kinds of schools: Hauptschule, Realschule or Gymnasium. Grundschule teachers recommend their students to a particular school based on such things as academic achievement, self-confidence and ability to work independently. However, in most states, parents have the final say as to which school their child attends following the fourth grade.

The Hauptschule (grades 5-9) teaches the same subjects as the Realschule and Gymnasium, but at a slower pace and with some vocational-oriented courses. It leads to part-time enrollment in a vocational school combined with apprenticeship training until the age of 18.

The Gymnasium leads to a diploma called the Abitur and prepares students for university study or for a dual academic and vocational credential. Curricula differ from school to school, but generally include German, mathematics, computer science, physics, chemistry, biology, geography, art (as well as crafts and design), music, history, philosophy, civics, social studies, and several foreign languages. In recent years many States have changed the curriculum so students can get the «Abi» at the end of the 12th grade. Other States are making the transition but may still require a 13th grade.